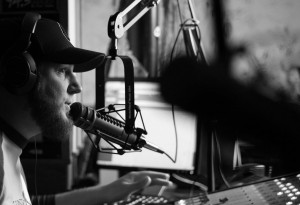 Born on a chilly, January, New England morn. Sid Black emerged poised to conquer the rock world that was indubitably laid before his chin whiskers. He trained dusk to dawn hard-hearted with one thought in mind: “This Rock, Isn’t Going To Rock Itself”. In his formidable years he sharpened his skills with the likes of Pantera, Black Sabbath and Slipknot knowing that the power he would need to helm would not come without a few bodies dropped in the pit and heinous neck pain from countless hours of head banging. Many years forward, the training had been completed and the airwaves of KILO radio approached with thunderous rapport. Though not completely ready for the task at hand, he stood tall and was primed to collect the attention of the KILO rockers. Many moons have passed, kings have born and fallen but one thing remains: Sid Black is a mere mortal with two kneecaps, two elbows, one nose, ten toes, eight fingers, two ears, a set of brown eyes and the sole purpose to remain seated, talk non-sense and eat tacos every opportunity within his grasp. He is, and always will be, the bare chested Fabio on the cover of your rock novel.

Mudvayne’s Chad Grey Falls onto Rail During Not Falling

Nascar Announcers Should Call Every Race Drunk Just Like They Sound When The Race Is Slowed Down to 0.5x Speed