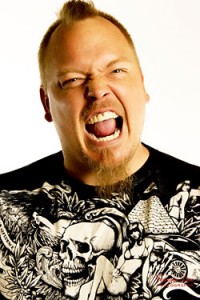 1. Favorite album – For nostalgia.. you can check out my “First album you ever bought” section… as far as favorite? That’s an impossible question…. Tools “Aenima”, Sublime “40 oz” and Brant Bjork “Jalamanta”.. are probably the most listened to albums in my collection.

2. Favorite concert ever – Tough one as well… so many shows (not to brag, but that’s why I got into the business… I couldn’t afford ticket’s, so free shows was a BIG perk (and now… like some F’ED up twilight zone twist, I can’t make it to many show’s cuz i gotta be up by 4am… WTF?… I hate you cruel irony) but Tool @ the Mammoth (now Fillmore) just before the band blew up… Maynard painted blue… that was pretty cool… VH w/ Diamond Dave was a dream come true, as was AC/DC on the black ice tour (1st time i ever got a chance to see those guys)… one of the first ever Audioslave show’s was cool… plus as a kid.. one of the few “original” guns N roses shows, front row at a Bodycount show (ice T was still cool then)… even my first concert ever… ’89 @ red rocks me, my best friend Andy… with Cinderella, Bulletboys, and…. oh god no!!!! winger… that’s still a great concert memory… so to answer your question… i don’t know.

When It’s NOT Your Time To Die:

A Woman Feeding Sharks Gets Pulled Into the Water, and Survives

A Flying Motorcycle Comes Within Inches of Hitting a Woman

A Woman Touches an Electric Fence and Wets Her Pants

The Cotton Candy Hot-dog…Wait, What?

Uh…Is This Safe? A Woman Texts While On a Scooter, With a Child in Her Lap

Because John Michaels Doesn’t Have Facebook! “Dude! Was That The Wing?”

A Two-Year-Old Climbs Up a “Childproof” Pool Ladder

NSFW!!! A Guy Holsters His Gun Into His Pants, and Then Bends Over and Accidentally Shoots Himself

Watch a meteorite fly over a FOO FIGHTERS show in the Netherlands.

A Creepy Guy Stalked an Uber Driver in New York

OUCH! A Streaker Got Crushed by a Canadian Football League Player

The largest bullfrog tadpole ever……

It’s The End Of The NBA Season And The Bad Lip Readers Were Busy Getting The Wrap Up Video Done, Nice!

Be Warned: If You Spend A Lot Of Cash On A Drone It Will Own You, Make You Run, Rip Off You Shoes, And Frighten Baby Ducks.

Check Out The Meteor That Hit South Africa, Hours After Astronomers Saw It. Don’t Worry “We See The Big Ones” They Say! I Feel Safe.

Someone’s Got A Case Of The Mondays, Bad Day For The Skyscraper Window Repair Guy.

Here’s The Link To The Website The KILO AM Show Was Talking About Where You Can Bet On Your Weight Loss And Make Some Cash!

Train Conductor Sets The Bar When It Come To Being An A-Hole.

This Amazing Video Shows The World Is A Tough Hard Place For Everyone And Everything. I Didn’t See It Coming.

The New Indian Tourism Catch Phrase “India, When We’re Not Being Eaten By Tigers, We’re Attacked By Monkeys.” Isn’t Going To Work.

The Bad Lip Readers Take On The Royal Wedding Made Me Cry Tears Of Joy And Happiness.

Imagine Hearing This When You’re Out In The Woods… That’s Why You Always Pack Extra Underwear.

This Is, By Far, The Most Awkward Pinata Beating Of All Time!!!!

This Is Kinda Cool. The Webster Website Lets You See What Words Were Born The Same Year As You.

And The Award For “Best Use Of A Cell Phone At A Concert” Goes To: All The People At Rock On The Range, Just Before The Tool Set.

Yanni? Laurel? Does IT Matter?