Pick Of The Litter: Rob Zombie 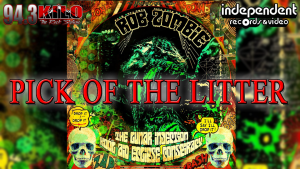 Rob Zombie is back and better than ever and is here to prove that rock isn’t dead, or better yet; rock is undead! Pick up the new record from Rob Zombie “The Lunar Injection Kool Aid Eclipse Conspiracy” featuring the new rock The Triumph Of King Freak, for $9.43 the whole month of April as part of KILO and Independent Records Pick Of The Litter.